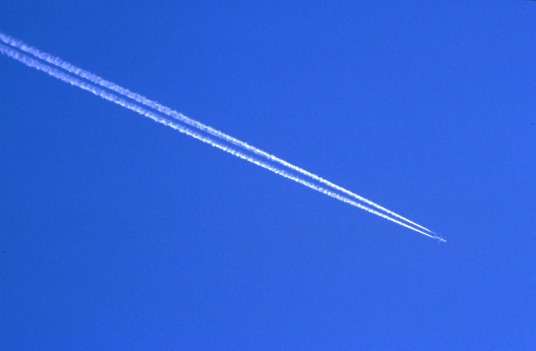 I was driving across the burning desert
When I spotted six jet planes
Leaving six white vapor trails across the bleak terrain
It was the hexagram of the heavens
it was the strings of my guitar
Amelia, it was just a false alarm

The drone of flying engines
Is a song so wild and blue
It scrambles time and seasons if it gets thru to you
Then your life becomes a travelogue
Of picture post card charms
Amelia, it was just a false alarm

People will tell you where they’ve gone
They’ll tell you where to go
But till you get there yourself you never really know
Where some have found their paradise
Other’s just come to harm
Oh, Amelia it was just a false alarm

A ghost of aviation
She was swallowed by the sky
Or by the sea like me she had a dream to fly
Like Icarus ascending
On beautiful foolish arms
Amelia, it was just a false alarm

Maybe I’ve never really loved
I guess that is the truth
I’ve spent my whole life in clouds at icy altitude
And looking down on everything
I crashed into his arms
Amelia, it was just a false alarm

The more we know about people, socially, culturally and personally, the more we feel we can anticipate how they might respond to any given situation.

And yet, it is impossible to predict anyone else’s behaviour with certainty.

Despite how close we might feel to another human being we can never really tell what they are going to do next.

Each of us has our own unique sense of being… the sense of an autobiographical self that is poised between the remembered past and the anticipated future.

And the nature of this sense of being, whether we realise it or not, is freedom.

And whilst it is sometimes hard to realise this sense of freedom in ourselves, it is practically impossible to experience it in others, because we can only ever experience their actions in the past.

This sense of freedom is central to the ideas of the Existentialist philosopher, Jean-Paul Sartre.

Hazel Barnes, is probably best known as the person who introduced the works of Jean-Paul Sartre to a wider American audience.  But as  her writing shows, Hazel Barnes was also something of a philosopher herself.

To explain the idea that freedom is at the heart of human experience, she came up with a wonderful visual analogy.

A visual analogy, that is both evocative and deeply illuminating.

The way we experience other human beings , she explains, is a bit like when you look up to see a jet aircraft flying across a clear blue sky.

You can see the white vapour trail stretching out for miles behind the plane, so you know where they have come from, and what the pilot’s previous actions are.

In other words you can experience his past. And from this past, you can also anticipate of where the pilot might go in the future.

What you cannot really know, however, is what is happening in the mind of the pilot or indeed what the pilot’s next move will be.

As an existentialist, Barnes understood that the core reality of every human being is freedom.

And that our daily denial of this essential nature was what Sartre had characterised as “Bad Faith”. Since it is a fundamental betrayal of our true selves.

Just because the pilot is flying in one direction, does not mean that he will always do so.

Every second he flies in that direction, he is doing so, not because he has no alternative, but because he is choosing to do so.

Because his true nature is freedom he has the potential to fly in any direction he wants.

And this is the unknowable part of any other human being.

It is 8.30am on a beautiful, clear Autumn morning in the pretty town of Albany, in upstate New York, where the trees are all changing colour to a brilliant blaze of red and gold.

Any one who happens to look up at the clear blue sky, might see the pure white line of a single vapour trail stretching across the sky from the East.

And, if they stop for a moment and carry on watching the plane, they will see something really quite unusual.

Because at this point, the plane which is a Boeing 767, banks sharply, and turns South, leaving a vapour trail at right angles to its original flight path.

The aircraft is in fact American Airlines Flight 11 flying from Boston to Los Angeles and the pilot is a man called Mohamed Atta.

Atta had been born on September 1, 1968 in the town of Kafr el-Sheikh, close to the shores of the Mediterranean Sea, in Northern Egypt.

His parents were ambitious for him, and, as a child, Atta was discouraged from socialising and spent most of his time at home studying.  His father, Mohamed el-Amir Awad el-Sayed Atta, was a succesful lawyer. His mother, Bouthayna Mohamed Mustapha Sheraqi, was also highly educated.

Atta had two sisters and his parents were equally ambitious for them too. One would go on on to become a medical doctor and the other a college professor.

In 1985, all this hard work paid off for Atta, when he secured a place at Cairo University to study engineering.

Atta excelled at his studies here, and in his final year he was admitted into the prestigious Cairo University architecture programme. And in 1990, graduated with a degree in architecture.

Nobody could have predicted that ten years later he would find himself at the controls of a Boeing 767, as he flew over the golden forests of upstate New York.

Nobody could have known that he would turn the plane away from it’s destination, Los Angeles, and begin flying due south down the Hudson River Valley towards New York.

And nobody could have imagined that around fifteen minutes later, at just after 8:46am, he would straighten up the plane, accelerate, and fly American Airlines Flight 11 straight into the the side of the North Tower of the World Trade Center.

With his strong engineering background, Mohamed Atta, of course knew that the Boeing 767 traveling at over 465 miles per hour and carrying more than 10,000 gallons of jet fuel, would explode immediately, killing everybody on board.

But nobody could else could have predicted that.

Not even Atta’s father, Mohamed el-Amir Awad el-Sayed Atta, who, to this day, continues to deny that his son could ever have been involved in something so unthinkable.

Because, however close we feel to another human being, we can never really tell what they are going to do next.

One thought on “Vapour Trails”