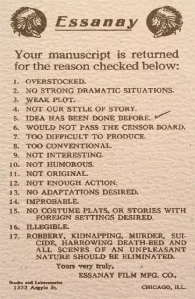 It’s an old advertising cliche: “The client loves it but……”. A phrase usually followed by what the client really thinks. The fact is, we often dislike providing criticism that sounds, well, critical. Particularly when it has to be delivered in person.

Essanay, the studio that achieved fame with the silent movies of Charlie Chaplin, had no such compunctions when it came to rejecting scripts.

As befitting a silent movie studio, they didn’t mince words when it came to providing scriptwriters with clear and concise feedback. As this pre-printed rejection slip so eloquently demonstrates.