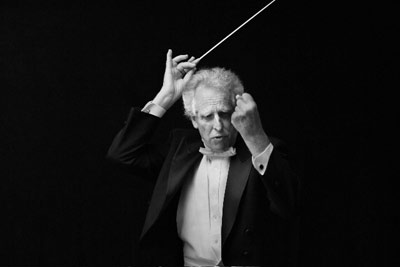 In this powerful TED Talk by Benjamin Zander, the music director of the Boston Philharmonic Orchestra neatly illustrates the fact that the most powerful way to change entrenched opinions and behaviours is often more like education than persuasion.

And as with all great teachers, in Zanders case, this is coupled with large amounts of charisma and infectious enthusiasm.

As TED puts it: “Benjamin Zander is known around the world as both a guest conductor and a speaker on leadership — and he’s been known to do both in a single performance. He uses music to help people open their minds and create joyful harmonies that bring out the best in themselves and their colleagues.

His provocative ideas about leadership are rooted in a partnership with Rosamund Stone Zander, with whom he co-wrote “The Art of Possibility.”

Or as Zander says himself: “The best review I ever got was not from a music critic, but from my father. He was 94 years old at the time and completely blind. He attended a Master Class I gave in London and sat there in his wheelchair for about three hours. When it was over, I went to speak with him. He lifted up his finger in his characteristic way and said, “I see that you are actually a member of the healing profession.” It seemed to me the highest accolade.

But there’s much more to be enjoyed at:

A highly experienced creative practitioner, Mike Garner is also a strong creative leader with a deep understanding of the effective use of creativity in all aspects of communication.

With widely recognised creative abilities, combined with a practical understanding of commercial requirements, Mike has an exceptional track record in helping start up and grow a number of highly successful creative businesses.

Over the past thirty years, Mike has played a key role in establishing and building three separate (and creatively and financially successful) creative agencies from scratch. These are: Saatch&Saatchi/Equator (1991), OgilvyOne Worldwide (1993) and Chemistry (1999)

One of the most highly awarded creatives in Ireland, Mike has won a vast number of national and international advertising awards, including Cannes, D&AD, The One Show, and ICAD as well as awards in more specialist disciplines such as sponsorship, direct response and direct mail.

With a strong set of practical craft skills that include, art direction, print design, packaging design, typography, copywriting, photography and film direction, Mike is a keen believer in leadership by example, and is happy to getting involved in any aspect of the creative process

Unusually, for someone with such a strong creative reputation, Mike also has formidable strategic planning skills. Having developed and implemented many highly successful strategic planning solutions for a wide variety of brands, he has also he has won two ADFX Advertising Effectiveness awards. (Including Gold, Silver and Bronze for Lidl at ADFX 2018).

Mike has always been a champion of a highly integrated approach to communications, at all times arguing for an active role for the brand, and always placing the consumer at the centre of things. With his diverse skill set, Mike provides the link between initial research, insight and strategy, right through to concept and final execution.